That The Days Go By And Never Come Again 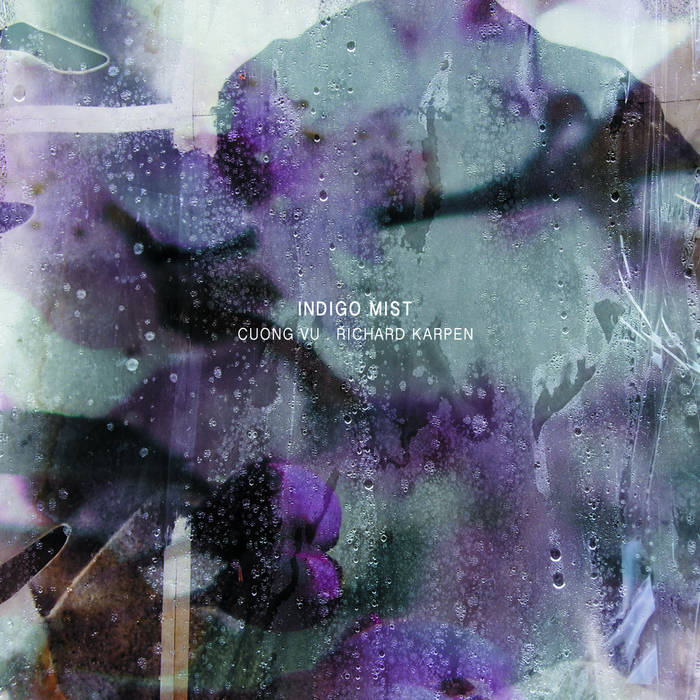 Trumpeter-composer Cuong Vu has established himself as a distinctive voice on the new music/improvising scene for his adventurous work over the past 20 years with the likes of guitarist Bill Frisell, Pat Metheny and Laurie Anderson as well as his four recordings as leader. Pianist Richard Karpen has earned accolades for his work in the classical field as well as for being a cutting edge sonic experimenter of the highest order. Joined by innovative bassist Luke Bergman (their faculty colleague at the University of Washington) and Vu’s longstanding bandmate, drummer Ted Poor, these two kindred spirits push the envelope in a myriad of provocative ways on That The Days Go By And Never Come Again. An extended suite that pays tribute to the indelible composing team of Duke Ellington and Billy Strayhorn in a most uncompromising fashion, their extraordinary RareNoise Records debut under the collective name of Indigo Mist is unlike any Ellingtonia you’ve ever heard.
Says Vu, “The whole record, to me, is a tone poem that is deeply affected by their music, even to the point where as we were at the apex of experimenting, Duke and Billy were always in the room with us and we had to come to terms with their presence. I feel that we've respectfully paid homage to them by taking our own connection to them and sprinkled that all over the record like a mist.”
The unlikely duo of New York-based improviser-bandleader Vu and Seattle academician Karpen crystallized when they met at the University of Washington. As Vu explains, “One of the things that I did when I became a new faculty here was to research my colleagues, mainly just to get to know about the various interests of the School of Music faculty and get a feel for how I would move about within that musical community. Once I started reading about Richard, I was immediately interested because his work was on the forefront of electro-acoustic music as well as being a composer from the Western Classical Art Music tradition. Much of classical music had such an impact on how I interfaced with music while I was doing my bachelors of music that I've always been interested in working with a serious composer at some point. Then when I heard his music I was completely blown away and knew that I had to work with him, if not to just make music together somehow, then to at least learn from him.”
Adds Karpen, “It is very unusual for a ‘classically’ trained composer like me, with my particular background and continued interest in experimental music and several decades of very deep involvement in the development of computer music both as a composer and as a programmer, to be head of such a School of Music. And it seems to me to be just as unusual for someone coming from a jazz background like Cuong, who is deeply involved in breaking through artificial boundaries through many kinds of experimentation, would be on the a faculty of such a school. The chance that both of us would be at the same place at the same time, and with one of us heading this school, seems to be one chance in millions! We are both people who know good luck when we see it. Our meeting is just great luck and we have taken full advantage of it!”

After getting to know each other, the idea of collaborating on a project soon emerged. “It became apparent that Richard was a fan of jazz and was into improvisation,” Vu recalls. “I had Ted Poor coming to the UW as a guest artist and decided to see how that would go if we played trio with Richard on piano. And from that beginning it's been an amazing confluence of musical approaches, traditions and concepts that work so well together. Outside of the musical areas that we overlap and that are perfectly congruent, the best parts of this musical mix are the disparate musical aesthetics, intent and varied points of reference and traditions that make for extremely challenging waters to navigate, but in such an exciting, educational and rewarding way.”
The four participants met and played together several times (including in live performance situations) before finally devising a plan for this uncompromising electro-acoustic outing. As Karpen explains, “The piece was developed over many months and the computer technologies, which are very complicated from a computer application point of view, took many hours of planning and programming. We knew early on, based on Cuong's initial idea, that we would be basing this work on the music of Ellington and to some extent a conceptual reference to the compositions of Charles Mingus. With regard to Mingus, it's not any particular piece but the way in which musical ideas drift in and out of focus, into and out of what you might call ‘musical realism’ and ‘musical surrealism.’ That's something one hears also in Beethoven and it's a way of creating music in time that has resonated with me since I was a very young composer in my teens.”
Adds Vu, “It was my idea to address the music of Ellington because I was deep in a re-examination of the jazz tradition phase which started in my first year of teaching at the University of Washington, crystalized by my teaching the jazz history course. Our approach to this project developed over time and the only thing that I really was sure of outside of this idea of addressing Ellington's music was that I wanted to tap into Richard's area of expertise with electro acoustic music and serious composition. I felt that Ted, Luke, and I were broad enough in our musical interests and thinking, even while firmly coming from the jazz tradition, to make this experiment in which we were ‘colliding’ with Richard's musical world work. And I felt that Richard's music was also a manifestation of an incredible breadth of interests, musically and beyond, that would enable him to move about freely and effectively within our collective (Ted's, Luke's and mine) world. I was sure that this mixture of chemical agents was going to produce something that I hadn't made or experienced before but was going to be super cool.”
The provocative tone poem kicks off with a torrent of drums from Ted Poor entitled “L’Heure Bleu.” While traversing the kit with power and precision, Poor’s drumming is sonically enhanced to give it the effect of rolling thunder, gently falling rain or a phalanx of drummers. Poor then switches to mallets for the evocative title track as Karpen and Vu make their entrance into the mysterious soundscape, beginning with Karpen’s sparsely plucked notes from inside the piano and continuing with Vu’s electronically treated trumpet and Luke Bergman’s sparse bass lines. The piece builds to a thunderous crescendo with Karpen’s throbbing bass notes and Cecil Tayloresque cascading in the high register of the piano. Poor’s potent free drumming fuels the track while Vu’s intuitive keening trumpet wails over the top of the fray. This urgent piece gradually morphs into a haunting treatment of Strayhorn’s “A Flower is a Lovesome Thing” that has Vu remaining close to the melody as Karpen pushes the harmonic envelope with his probing piano work. It then flows organically into a thoughtful but uncompromising meditation on Strayhorn entitled “Billy.”

All other compositions by Karpen, Vu, Bergman, and Vu.
Published by Jack House Music, BMI 2014.

Special thanks to - DXArts - Center for Digital Arts and Experimental Media, The University of Washington's Royalty Research Fund