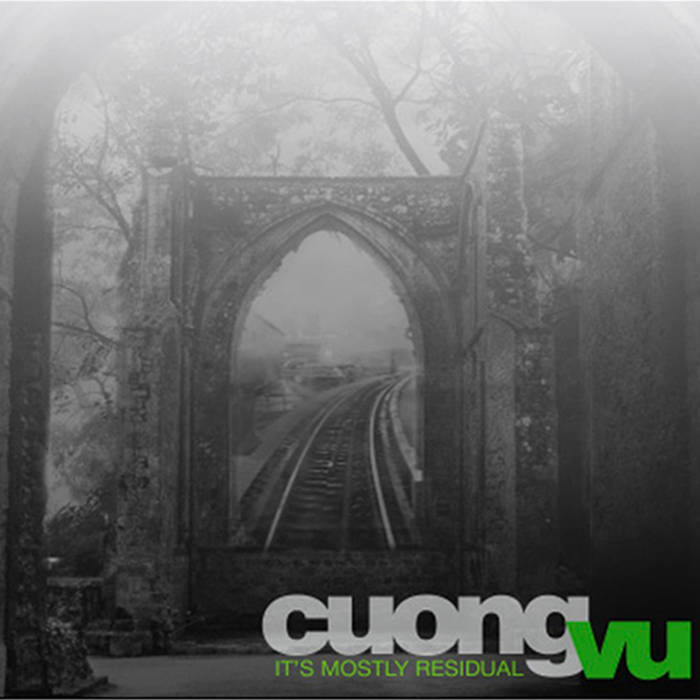 John Cratchley Cuong Vu's trio is an amazing and extraordinary group and they have an utterly distinct sound and profile...I have played my cd version of this into the ground...it has the added advantage of the presence of Bill Frisell (try this album in tandem with Cuong's new album: Trio + Pat Metheny).
Also try his 'Vu-Tet' recording...in my view one of the outstanding recordings of the new millennium.

Gum is the enemy

Walk the Line might have been an Academy Award- winning biopic about Johnny Cash released in 2005, but nobody in the world of art and entertainment walked the line more skillfully that year than trumpeter/bandleader Cuong Vu on his It's Mostly Residual CD. OK, drawing parallels between a film about a country music icon and a CD by this phenomenal trumpeter may be stretching things a bit. But It's Mostly Residual unquestionably has a widescreen cinematic quality, and the album also showcases Vu and his bandmates carefully treading a path between two forms of jazz whose adherents (audiences and musicians) don't often mingle. Can contemporary (Pat Metheny, Mark Isham) and avant (Chris Speed's yeah NO, Dave Douglas' Sanctuary) jazz find a place to coalesce? Perhaps Cuong Vu, whose widest audience exposure in the mid-2000s is probably through his membership in the Pat Metheny Group, is the man to make it happen. Vu emerged in the 1990s as one of the most distinctive voices on the so-called New York downtown scene, with a stronger embrace of electronic soundscapes than many of his peers. And yet, Vu has chops to burn when he sticks his unadorned acoustic horn in your ear, and it's this dichotomy that helps to make his music so compelling. It's Mostly Residual often places the two sides of Vu in startlingly abrupt juxtapositions; at other times those two sides are organically melded and sonically integrated, demonstrating both Vu's acumen as composer and arranger and the in-the-moment improvising skills of his extraordinary band.

At the beginning of the opening title track, Stomu Takeishi's fluid basslines, Ted Poor's skittering percussion, Bill Frisell's crisp yet warm guitar-picking, and the whooshes of Vu's trumpet coalesce around a gently insistent rhythm -- a memorable theme then emerges, stated by Vu with elongated notes drawn across a dramatically building chord progression. Comparisons with Mark Isham may seem inevitable, given the music's form as well as atmosphere, so one might initially be tempted to hear "It's Mostly Residual" as beautiful soundtrack music in the Isham mold -- that is, until Frisell explodes the piece with a deep slash of guitar and the music comes apart at the seams with looping electronic effects, Frisell cutting loose, and the pulse barely suggested as Poor thrashes away. Takeishi leads the way back to the theme and spectacular crescendos return the listener through a forest of loops to a final understated resolution -- all this, and the CD's diverse journey has hardly begun. And as for one of those startling contrasts, "It's Mostly Residual" has scarcely had time to fade away before the intro of "Expressions of a Neurotic Impulse" immediately ditches the electronics for a mix and performance that are so crisp, tight, and impossibly punched-up that they are almost zany and madcap, recalling opening salvo "Garbo" from the Avant label CD Ragged Jack by the Saft/Vu quartet back in 1997. The acoustic clarity is soon overtaken, however -- Frisell's cranked-up guitar blasts into the mix, electronic treatments are reintroduced, and unearthly sounds are soon looping and colliding across the stereo field. (Vu the trickster fools the listener on occasion: that onslaught of between-station radio static is the sound of his trumpet before electronic processing is applied.) The band momentarily lingers in electric Miles territory before escalating the tension into a full-bore assault perhaps a tad past "neurotic" on the madness meter -- and then suddenly, before you can catch your breath, the band is back at the introductory manic theme and the piece is over.

And so it goes: "Patchwork" begins and ends in lovely and comparatively understated fashion -- but don't be fooled, there are sonic surprises around every corner at the heart of the piece. "Brittle, Like Twigs" bursts with staccato energy and funk, "Chitter Chatter" melds cinematic high drama to a rollicking high-spirited conclusion for one of the CD's most engaging rides, and the concluding "Blur" ends the album on an elegiac note, again beautiful and cinematic but with the pyrotechnics this time held somewhat in check. In support of the always exemplary Vu, longtime bandmate Takeishi remains one of the most innovative electric bassists on the planet, slippery and limber but powerful as he leads the band through the changes, pouncing on emphatic low notes exactly when needed and cutting through the spiraling electronics with his characteristic harmonics-laden tone; drummer Ted Poor's performance is equal to anything laid down by previous Vu collaborators Jim Black and John Hollenbeck; and Frisell, while actually in the role of special guest, is a full participant in the proceedings, whether joining Vu in thematic unison lines, marshaling his own battery of looping effects, or burning through edgy solos that are miles away from the sometimes laid-back Americana of his own albums. Vu proves here that he can indeed walk the line, and the bottom line is that he is not too "out" for the Pat Metheny crowd on one side or too "in" for the avant jazz crowd on the other -- his balance is perfect, and It's Mostly Residual (available through www.cuongvu.com) is one of the finest CDs of both-sides jazz released in the mid-2000s. ~ Dave Lynch, Rovi