Ballet (The Music of Michael Gibbs) 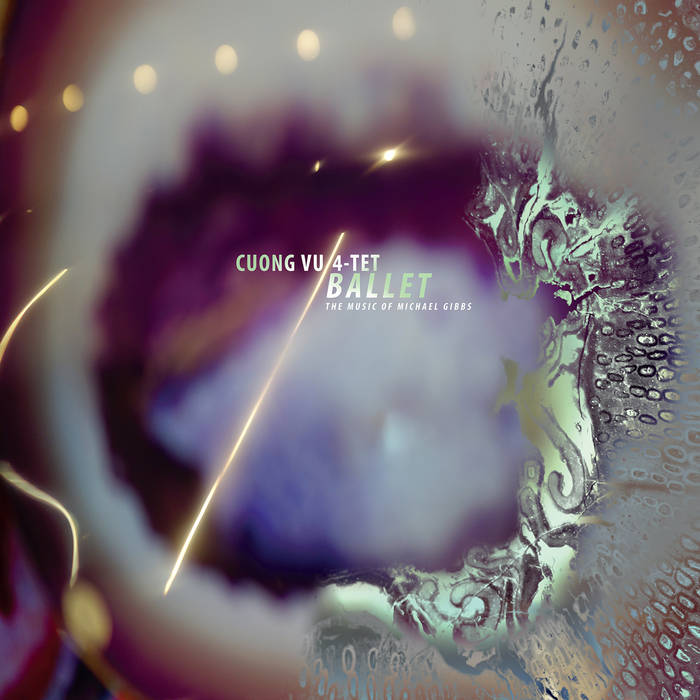 On the heels of his acclaimed 2016 recording, Cuong Vu Trio Meets Pat Metheny (Nonesuch Records), and his 2014 collaboration with electro-acoustic pianist-composer and Director of the School of Music at the University of Washington Richard Karpen on their Ellington-Strayhorn tribute That The Days Go By And Never Come Again (RareNoise Records), trumpeter-composer Cuong Vu joins forces with guest guitarist Bill Frisell on Ballet, a tribute to renowned composer-arranger Michael Gibbs.

With regular Vu-Tet bassist Luke Bergman and drummer Ted Poor, the four exchange ideas in the moment in a collective fashion on the expansive opening track, “Ballet,” which gradually morphs into a kind of quirky, dissonant blues waltz featuring brilliant solos from Vu and Frisell. The ethereal ballad “Feelings and Things” showcases Frisell’s more sensitive and spacious side while Vu turns in a remarkably lyrical solo here. “Blue Comedy,” a tune recorded by the Gary Burton Quartet (with Larry Coryell, Steve Swallow and Bob Moses) on 1968’s In Concert, kicks off with a drum salvo from Poor before Frisell and Vu join together on some tight unisons through the intricate head. As the piece progresses, it picks up a kind of shuffle-swing momentum which Frisell solos over with his signature fractured phrasing and surprising detours. Vu and Poor engage in some spirited exchanges near the end of this jaunty number. The most dramatic piece on the album, “And on the Third Day,” which originally appeared on Gibbs’ 1970 self-titled debut album, evolves gradually from a peaceful opening drone to a turbulent crescendo featuring powerful. soaring solos from both Vu and Frisell, the latter power chording with impunity and kicking on his fuzz box and backwards pedal for maximum skronking effect.

“This recording came about as Bill’s wish to bring Mike Gibbs out to the University of Washington to do some of his arrangements of Bill’s music for orchestra,” says Vu. “Mike is indeed an iconic hero to Bill and it all came about from Bill’s desire to bring him to the UW. I asked the boss, Director of the School of Music, Richard Karpen, and he gave us the greenlight because he wanted to honor Bill. We did two nights with the first night being the orchestra night and the second being the big band night (both student ensembles). The quartet of Bill, Ted Poor, Luke Bergman and myself was a featured part of those orchestra and the big band performances. In addition to that, the quartet, without orchestra or big band, played Mike’s music as the second set each night. This recording is from the second night.”

Regarding this exhilarating Vu-Tet project, Vu says, “This was a very collective/equal opportunity effort, so we just played and dealt with the cards collectively as they were dealt. I think it just comes down to the collection of players and our individual aesthetics coming together and trying to find a common goal/language.” They succeed in triumphant fashion on Ballet, the second collaboration between Cuong Vu and Bill Frisell (their first was Vu’s 2005 ArtistShare album Mostly Residual).

Born in Saigon on September 19, 1969, Vu immigrated to Seattle with his family when he was six. At age 11 he began to play the trumpet and later received a full scholarship from the New England Conservatory of Music, where he received his Bachelor of Music in jazz studies with a distinction in performance. He moved to New York in 1994 and began his career actively leading various groups while also working with a wide variety of artists including Laurie Anderson, David Bowie, Dave Douglas, Myra Melford, Gerry Hemingway, Cibo Matto and Mitchell Froom. As a member of the Pat Metheny Group he performed on the Grammy-winning albums Speaking of Now in 2002 and The Way Up in 2005. As a leader, Cuong has released nine recordings, each of which carves out a distinctive sonic territory on the trumpet while blurring all stylistic borders. He is currently an associate professor and chair of Jazz Studies at the University of Washington. As an assistant professor in Jazz Studies, he was awarded the University of Washington’s prestigious Distinguished Teacher Award and is a Donald E. Petersen Endowed Fellow. He’s been recognized as one of the top 50 young Jazz Artists in an article called “The New Masters” from the British magazine Classic CD and in 2006 was named the Best International Jazz Artist by the Italian Jazz Critics’ Society.

All compositions by Michael Gibbs

Thanks to: Michael Gibbs for his vast wisdom and inspiration, Richard Karpen (the enabler of all good things), Giacomo Bruzzo for his endless support.